A wide-ranging conversation about the land and people of Israel (wherever we may be found) addressing society, culture and other issues of concern.

Join us on Monday 15 November with guest Yair Miller MFIA and Jasmine Malul  to discuss Israeli Arabs in Israel today – Part of the Government on one hand, involved in conflict and violence on another, how to make sense of their situation. 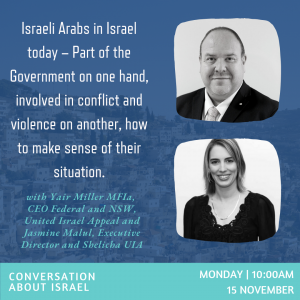 He serves as Honorary Secretary of the Memorial Foundation for Jewish Culture representing the ECAJ.

A founding member of the Australian Dialogue of Muslims, Christians and Jews, Yair has worked in the interfaith space for nearly two decades. Yair serves on a wide range of community Boards including the Committee of Management of the ECAJ and as a Director of The Council for Jewish Community security (NSW), NSW Jewish War Memorial, Y2I, The Shabbat Project and Kehillat Masada.

Yair served on the NSW Parole Authority Board for three years and now sits on the Judicial Commission of NSW as a community Board Member. These are both significant appointments by the NSW State Government.

He was awarded an Order of Australia Medal for community service and interfaith relations on Australia Day 2017.

Jasmine Malul is the executive director/Shelicha of UIA since January 2020 in Sydney.
Born and raised in Kibbutz Shamir in the Upper Galili of Israel.

18 Oct Conversations About Israel: Are Israeli Settlements Illegal or not

30 Aug Conversations About Israel: 5781 A Year in reflection

31 May Conversations About Israel: Yair Miller

24 May Conversations About Israel: Jack Frisch – “The Economics of Fairness”

3 May Conversations About Israel: Yigal Nisell – “73 years of demography and the shaping of Israel’s borders”