Emanuel is participating in the Memorial Scrolls Trust’s project that aims to link over 1000 Torah Scroll holders to the MST and to each other, ensuring Torah scrolls remain identified, their location known, and will allow future generations to learn about the special legacy of these survivors and witnesses of the Shoah and most importantly, they will never be forgotten.

According to our records MST#1321 (pictured) is one of 6 Sifrei Torah with a provenance of Nymburk in Bohemia and was written around 300 years ago.

2024 will mark the 60th anniversary of the scrolls being saved from further loss under communist rule by being brought to London, since when we have allocated 1400 to communities around the world. 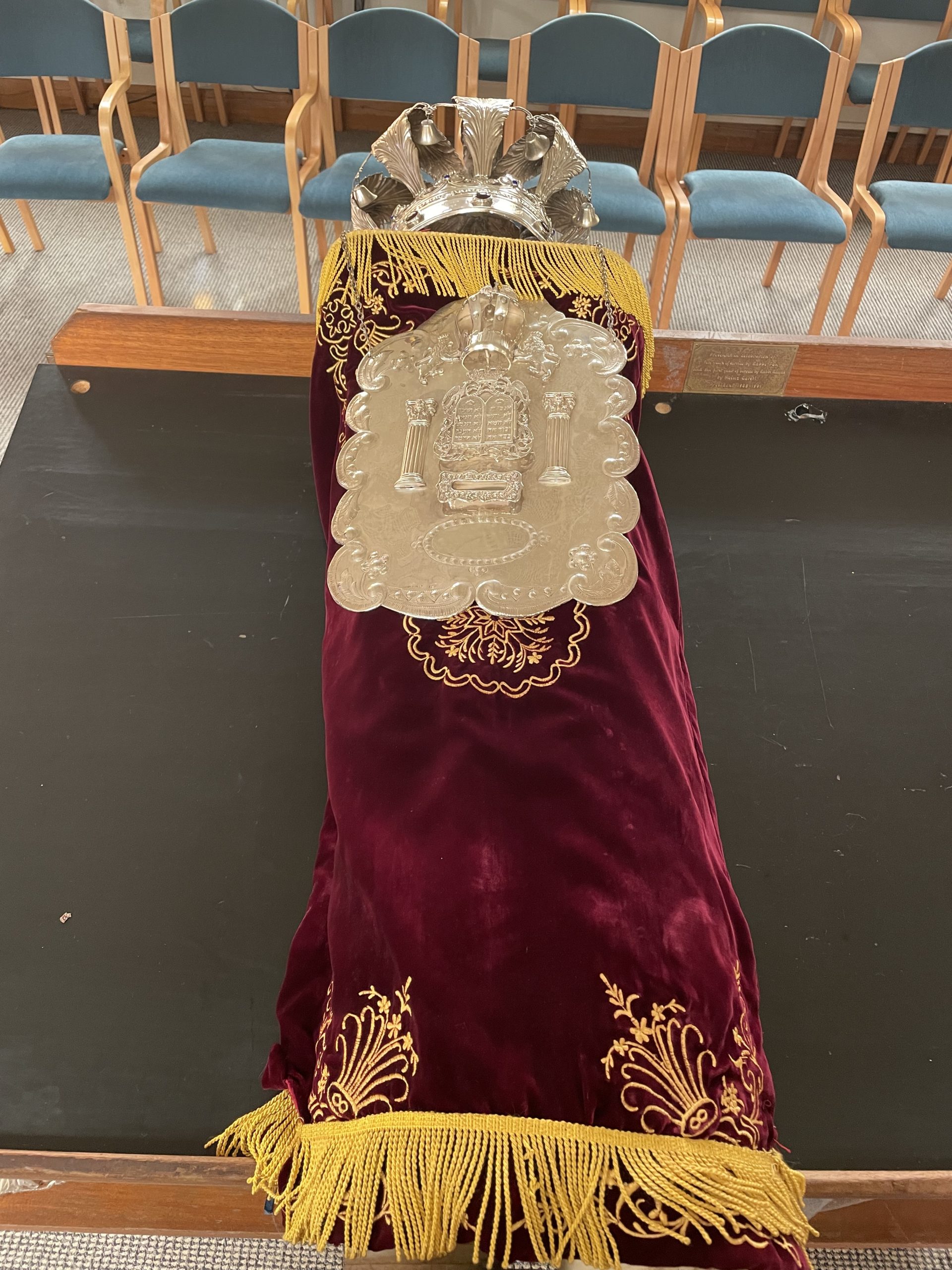 The 1,564 sacred Scrolls which came to Westminster Synagogue on 7 February 1964, had been gathered together in Prague, from the desolated synagogues of Bohemia and Moravia, by the Nazi official in charge of the Czech “Protectorate.” Much more synagogue booty, books, pictures, embroidered vestments, and ceremonial objects of silver and gold were similarly collected by the Nazis, and many of these articles are now in the State Jewish Museum in Prague. The Scrolls themselves lay piled in the disused Michle Synagogue for more than 20 years. It is believed that they were originally gathered for permanent exhibition as relics of a defunct culture.

At the end of the war the surviving remnant of the Prague Jewish community lacked the resources to maintain the museum, and it came under the control of the Czech state authorities. It was maintained conscientiously as a memorial to the vanished communities, but the Sifrei Torah (Scrolls of the Law) proved an embarrassment; they could not be effectively displayed as museum exhibits, and it was realized that they would eventually deteriorate if they remained rolled up and unused. 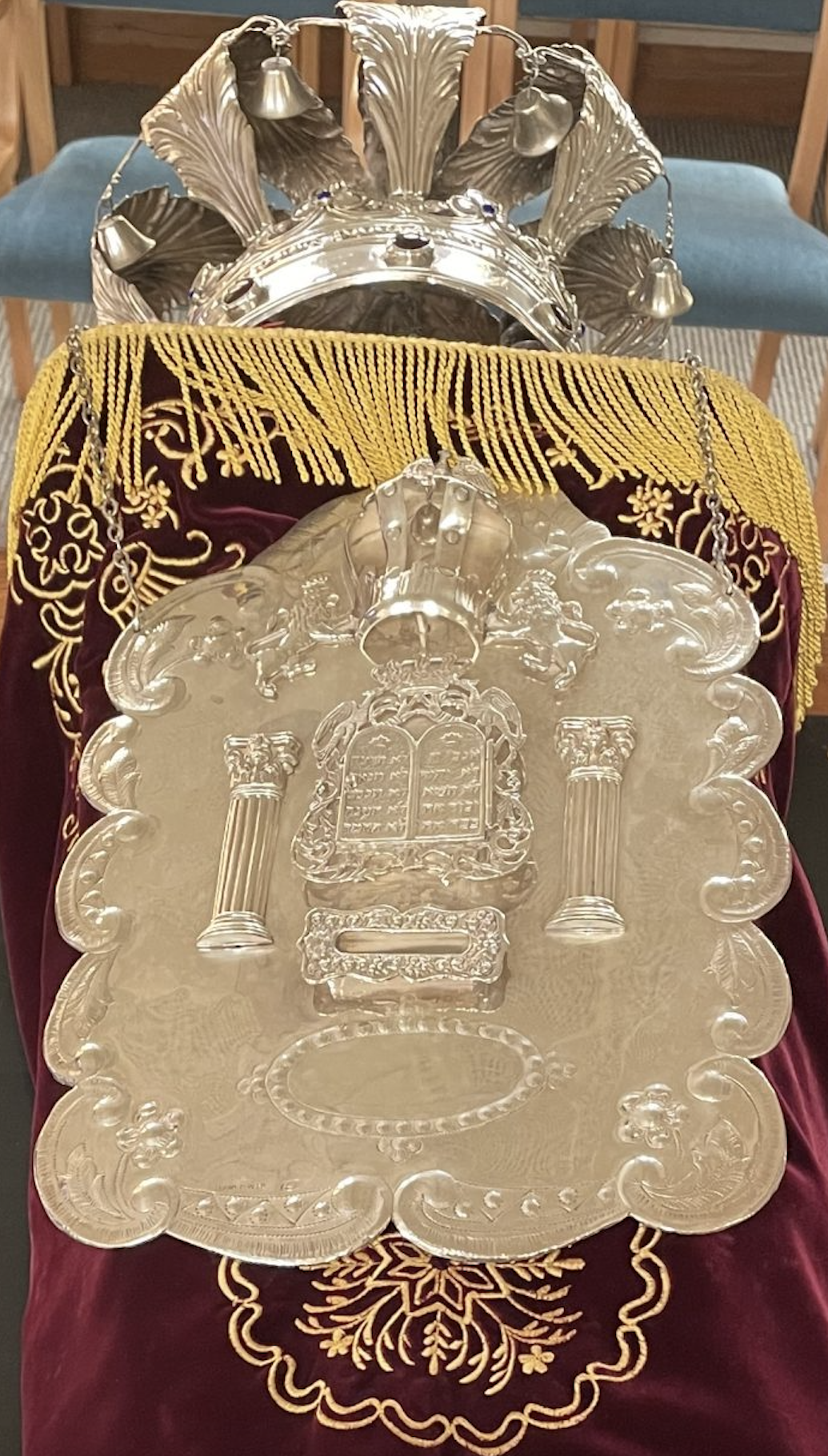 In 1963, a prominent British art dealer, who enjoyed the confidence of Artia, the Czech government agency responsible for cultural property, was able to arrange for the scrolls to be acquired by Ralph Yablon, a London businessman and philanthropist, on the understanding that they would be entrusted to a responsible noncommercial body; the honorary officers of Westminster Synagogue, an independent London congregation, accepted Yablon’s invitation to undertake this responsibility. After a preliminary examination in Prague by Chimen Abramsky (later professor of Hebrew and Jewish Studies at the University of London), the scrolls were carefully packed and shipped to London.

On 7 February 1964, 1,564 Sifrei Torah – a consignment which must have been unprecedented in Jewish history – arrived at Westminster Synagogue. There they were housed in numbered cradles in specially constructed racks, while the work of inspection and classification was undertaken. Each scroll was expertly examined and a record made of the condition of the parchment, the state of the calligraphy, and (so far as these could be ascertained) the age and place of origin of the scroll. Many of the labels attached more than 20 years before had survived and provided valuable information; and in some cases despairing messages were concealed in the scrolls.

On the basis of this painstaking study, the scrolls were classified into grades, ranging from those without serious defect and thus readily usable, to those beyond satisfactory repair and therefore suitable only for commemorative use. Between these were the middle grades, comprising many scrolls which could be made usable by repair, or had some parts which it was possible to restore.

The task of inspection and classification was directed by Rabbi Harold Reinhart, the minister of Westminster Synagogue, who gave devoted attention to every aspect of the project until his death in 1969. A committee had been formed to take responsibility for the scrolls, and the formidable task of administering the work of repair and distribution was undertaken by Ruth Shaffer, daughter of the Yiddish novelist and dramatist Sholem Asch.

The completion of the preliminary study and classification was marked, in June 1965, by a solemn assembly at Westminster Synagogue; this was attended by representatives of all sections of the Jewish community and by ministers and scholars of other faiths. The memorial prayers were read by then Chief Rabbi Sir Israel Brodie and a message of good wishes was received from the president of the Prague Jewish community.

In the ensuing years visitors from many parts of the world have come to Westminster Synagogue to see the scrolls and often to witness the work of restoration in progress. Jews and non-Jews alike, including parties from schools and other institutions, have been deeply moved by the human tragedy implicit in what they have seen and by the scope and importance of the project.

The arrival of the scrolls in London had been widely reported, and requests for scrolls soon reached the committee from many parts of the world; the process of allocation and distribution, which started soon after classification had been completed, has continued without interruption up to the present time. In the allocation of scrolls, priority was given from the outset to congregations needing a Sefer Torah for use in services, but many scrolls that could not be made acceptable for this purpose have been distributed to synagogues, educational institutions, and other bodies wishing to have a memorial to the communities destroyed in the Holocaust.

The scrolls are handed to recipients on “permanent loan,” and congregations are invited to make a contribution to the cost of repair and distribution. Each scroll bears a brass identification tablet and is accompanied by a certificate recording its origin.

In many cases, allocations have been made to synagogues which include among their members some who have personal or family links with the communities from which the scrolls originated. Information about the origin of the scrolls and their new locations is now being systematically recorded with the aid of a computer system. 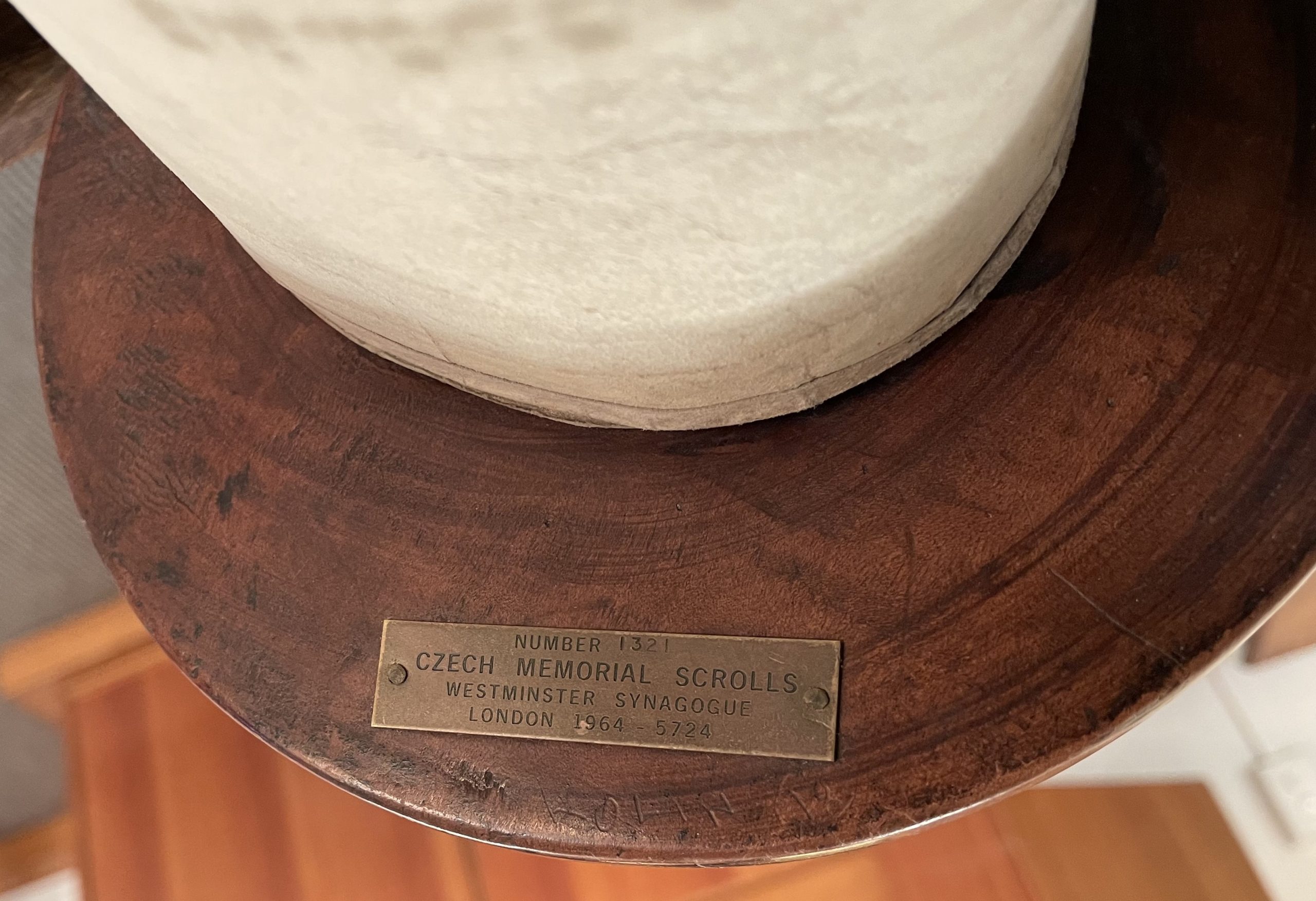 The work of restoration, with all its traditional techniques and discipline continued for nearly 40 years until all available scrolls had been allocated. As a result of scrolls being returned  when communities closing or merge, we are still able to allocate a few scrolls annually.  David Brand a highly skilled Sofer (scribe) worked on the scrolls for almost 30 years.  In 1980 the Westminster Synagogue created the Memorial Scrolls Trust to care for the scrolls. A permanent exhibition of some 150 scrolls and nearly 500 binders can be seen at the MST Czech Memorial Scrolls Museum in Kent House, London, the home of the Westminster Synagogue

Czech memorial scrolls are now in use in many parts of the world. The United States, as might be expected, has been the main recipient; but many requests from Israel have been met, as have others from virtually every country in which Jewish communities flourish freely. In addition, scrolls appropriate as memorials are to be found at Yad Vashem, in the Royal Library at Windsor Castle, and in many other places where they serve, in Harold Reinhart’s words, “to live, to commemorate, to inspire a saddened but not hopeless world, and to glorify the holy Name.”