In 2018, Emanuel Synagogue celebrated its 80th anniversary, a vastly expanded organisation from its first service led by Rabbi Herman Sanger from Melbourne in 1938 when it was founded as The Congregation of the Temple Emanuel, a progressive synagogue. In its first year, the synagogue not only ran Shabbat services, but also began a Hebrew and Religion School, a youth group and a women’s guild.

The congregation has had stable leadership from its rabbis, all of whom have been long serving. Rabbi Max Schenk, originally from the US, served the community from 1938-1948, overseeing the construction of the original building in 1941, one of the few synagogues being built in the world as so many were being destroyed in Europe. A visionary, Rabbi Schenk was an ardent Zionist, establishing the connection between our community and Israel from that time forward. 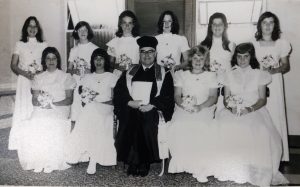 Rabbi Rudi Brasch succeeded Rabbi Schenk, serving the congregation from 1949-1979; Rabbi Brasch was a noted scholar who came from Germany and authored many books on Judaism. He was highly committed to interfaith work, which has also been a core concern of the synagogue from that time until now. Rabbi Brasch understood the importance of music for a spiritual synagogue service. The choir under Werner Baer was considered one of the finest in the land, and this commitment to world class music remains part of Emanuel’s identity. In 1952, Cantor Michael Deutsch joined the clergy team, and was the heart and soul of the Emanuel community for over 50 years, not only for his magnificent voice, but also his guiding three generations through significant moments in their lives.

Rabbi Brian Fox, New Zealand born, came to Emanuel in 1979 and served the community for 20 years.  He focused on engaging the youth of the community, founding Emanuel School in 1983, which is now one of the premier Jewish Day Schools in all of Australia.  He also founded Netzer with Rabbi Richard Lampert of our sister synagogue in Chatswood, to this day, the major youth movement connected to our synagogue.

Rabbi Jeffrey Kamins came from California to join Rabbi Fox and Cantor Deutsch in 1989, Emanuel’s first assistant rabbi.  In 1991, along with just enough others to make a minyan, he established Emanuel’s first Masorti minyan, eventually leading to Emanuel’s commitment to pluralism and embrace of Progressive, Masorti and Renewal streams in Judaism. As Emanuel began to grow, the three were joined in 1998 by Rabbi Jacqueline Ninio, Emanuel’s first Australian born and also first woman rabbi.  She has an absolute commitment to social justice and inclusion, and spearheaded Emanuel’s embrace of the LGBTQ community.

In the last 20 years, Emanuel has become known as Australia’s most inclusive and dynamic congregation, with its commitment to social justice works (especially concerning refugees and the homeless), other matters of human rights as well as animal rights, and environmental action. In 2016, Rabbi Rafi Kaiserblueth joined the synagogue and Sam Zwarenstein was installed as Reverend, as we strive to engage and educate our community in the practice of Judaism as a committed way of life to bring light to our world. After an absence of more than 20 years, Cantor George Mordecai returned to Sydney from the US in 2018 and has already made a significant contribution to improving the role of music in the synagogue. In January 2021, Cantor Mordecai was ordained as a Rabbi.